I put together a photo essay focusing on Buddhism and the cultures of the Himalayan region that my mother and I traveled through during our trek as a submission for the 2015 Wilbur Awards. You can view my submission below. – Nile Sprague 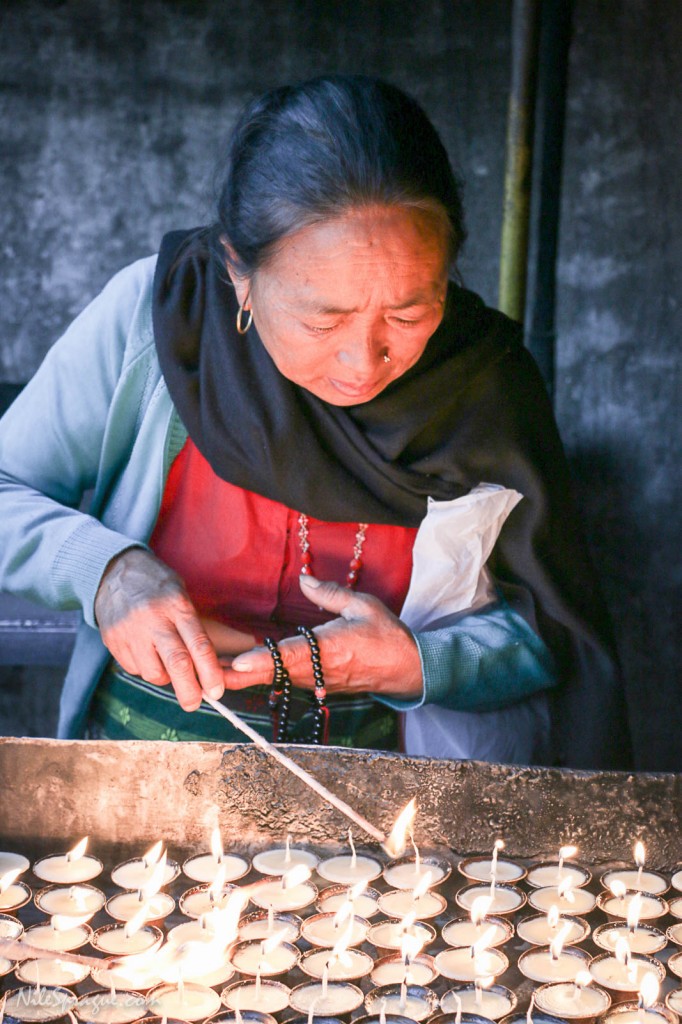 A woman lights butter lamps as an offering representing the illumination of wisdom, outside the stupa at Boudhanath, Kathmandu Valley. The stupa at Boudhanath is one of the world’s largest, dating as early as the fifth century, and stands at the center of a large Tibetan refugee community. Over fifty Tibetan monasteries surround the stupa. 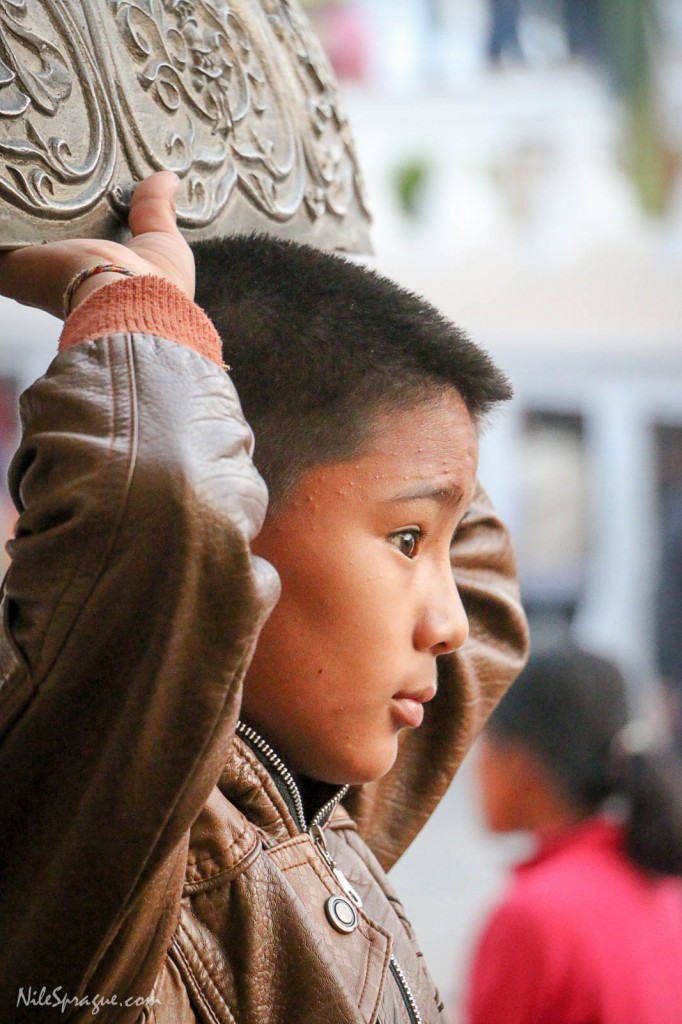 Boy standing under a huge bell on the perimeter of the stupa at Boudhanath. Each evening, hundreds of people gather at the stupa to walk kora, circumambulating the stupa in a clockwise direction as they say prayers, turn prayer wheels, and interact with one another. 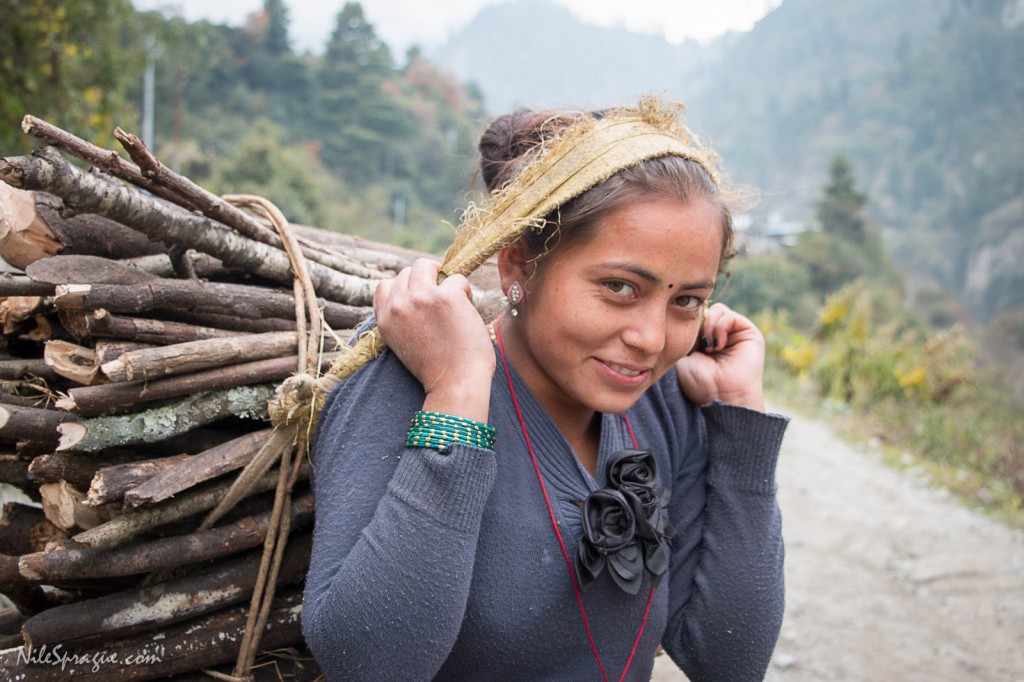 Woman carrying firewood on her back, with weight supported by a tumpline strap on her head, Bagarchhap, Manang District. Deforestation is prevalent in this region, and poses a substantial threat to the environment. The job of collecting firewood typically falls to women, who must range for many miles to forage for the fuel. Wealthier homes sometimes have access to propane fuel, but it is very costly to transport into these remote villages. The other alternative is to burn animal dung, which is often the choice in areas lacking forest resources. 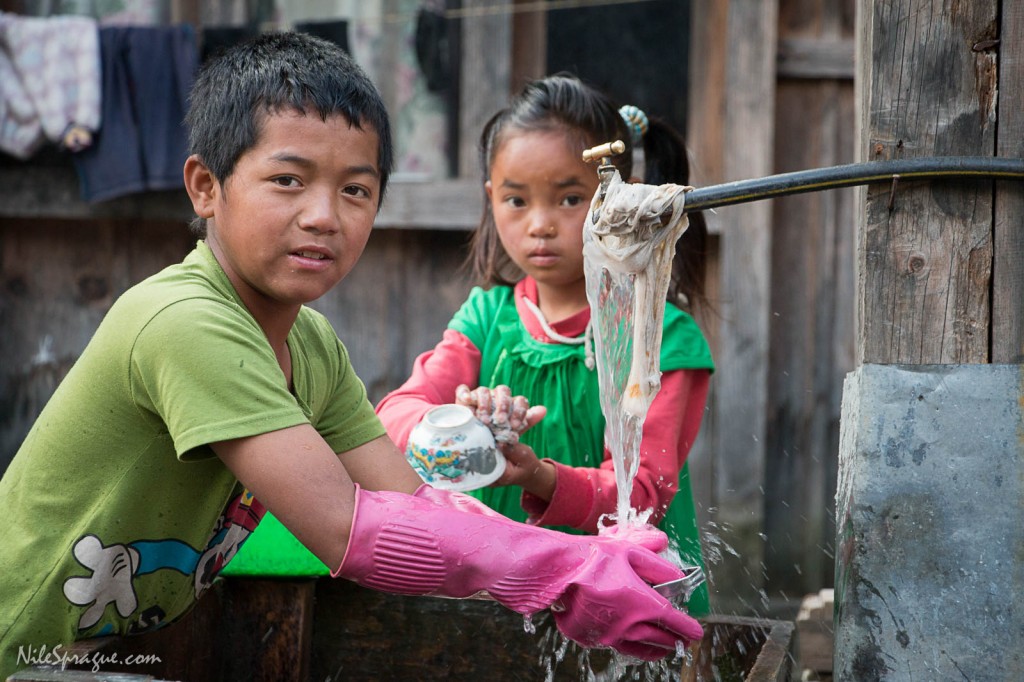 Panoramic view of Tilicho Lake, claimed to be the highest elevation lake in the world at 16,237 feet. Manang District. 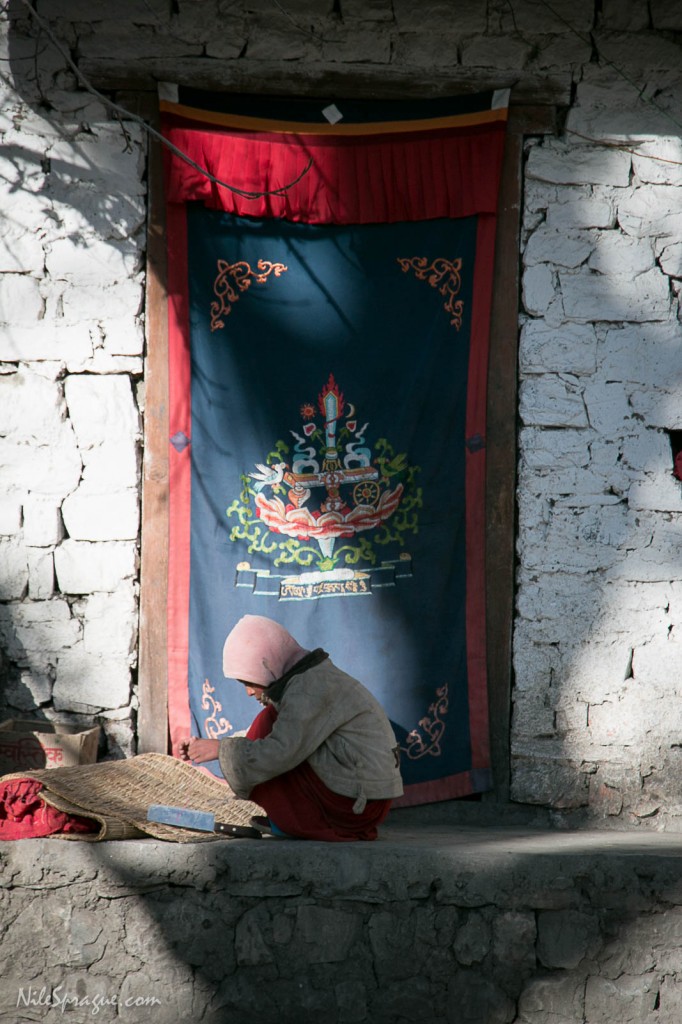 A novice monk squats in the sun at the Muktinath Monastery, Lower Mustang. A boy can take novice vows at age 7, when he is big enough to scare a crow away. Full ordination can be bestowed at age 20, the intervening years filled with study and learning of the five great books of Buddhism. 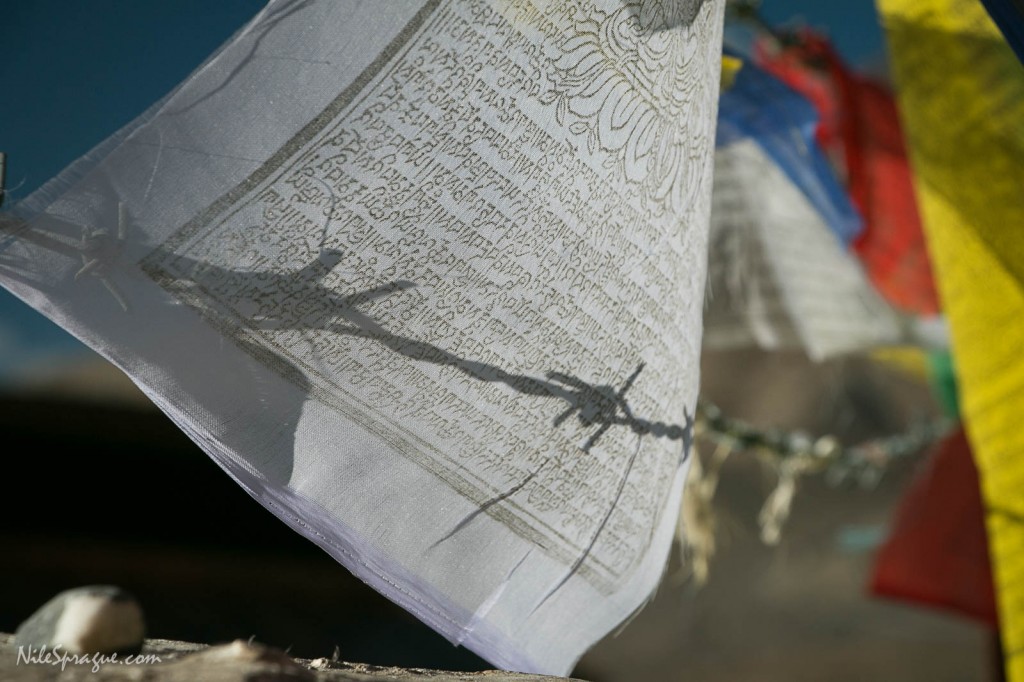 Tibetan prayer flags with the shadow of barbed wire blowing in the wind, encircling the monastery at Muktinath, Lower Mustang. Prayer flags are traditionally used to promote peace, compassion, strength, and wisdom. Tibetans believe the prayers and mantras will be blown by the wind to spread good will and compassion to the ends of the world. 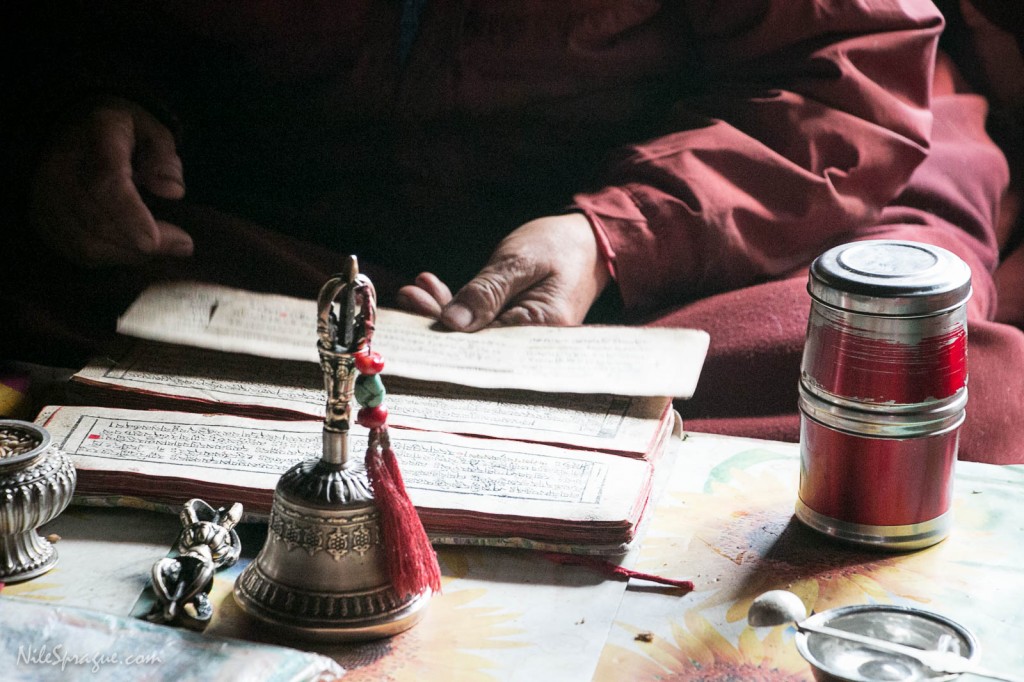 The hands of a Buddhist monk holding pages from an ancient prayer book on the last day of an eight day puja, Royal Mustang Hotel, Ghemi, Upper Mustang. The prayer book is printed with hand-carved blocks on paper called pecha. In the foreground are two ceremonial instruments: a brass bell and dorje. This puja ceremony is held annually for prosperity and good luck, during which numerous monks gather to chant prayers throughout the day. The dorje is held in the right hand and represents the male principle: action or means. The bell is held in the left hand and represents the female principle: wisdom. 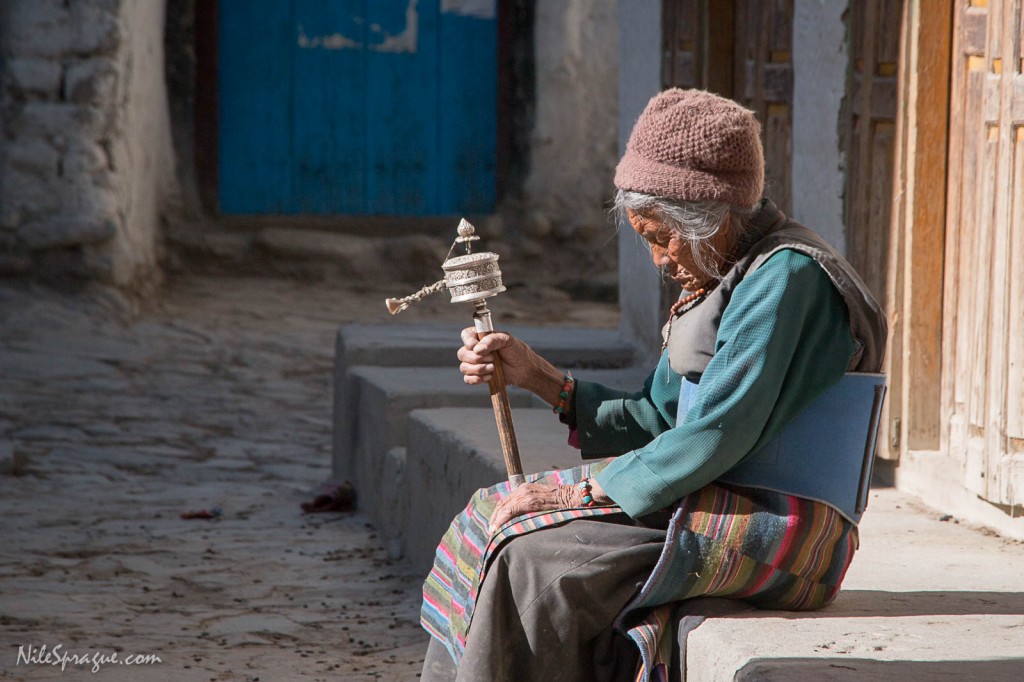 Elderly Tibetan woman spinning prayer wheel as she sits in the afternoon sun, Lo Manthang, Upper Mustang. Prayer wheels are filled with prayers and mantras, thus sending them out into the world in much the same way as prayer flags. Each afternoon, as I walked the streets of Lo Manthang, I would see this grandmother seated in the sun, deep in meditation with her eyes closed, spinning her prayer wheel. 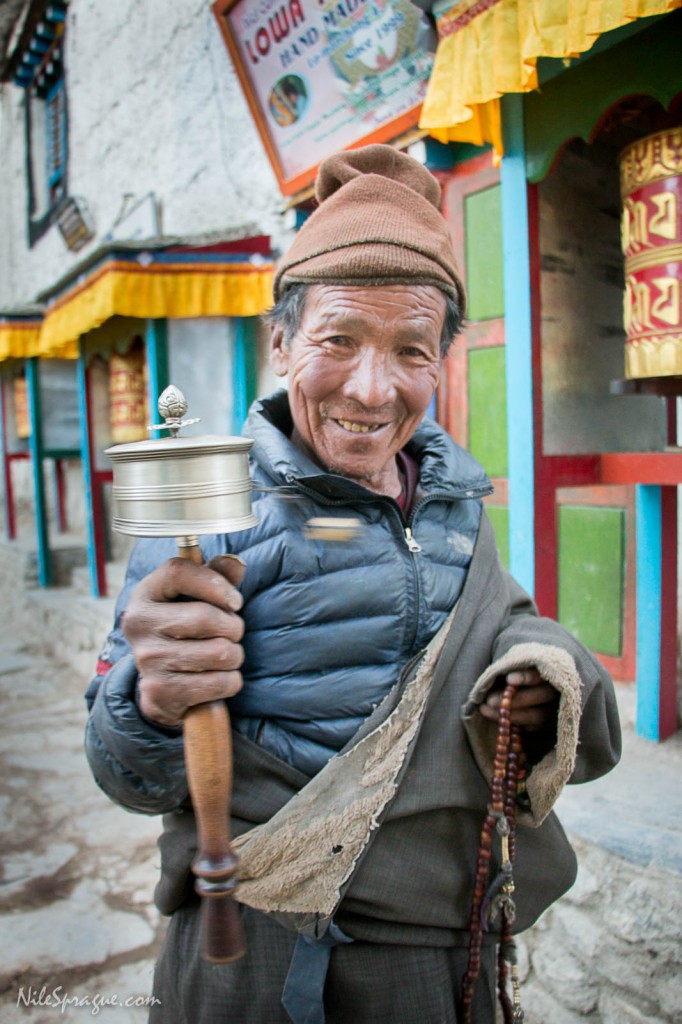 Tibetan man spinning prayer wheel, Lo Manthang, Upper Mustang. Late in the afternoon each day, most of the residents of the small capital city would turn out to walk kora, circumambulating the perimeter of the city in small groups in a clockwise direction, saying prayers, turning prayer wheels, and chatting. 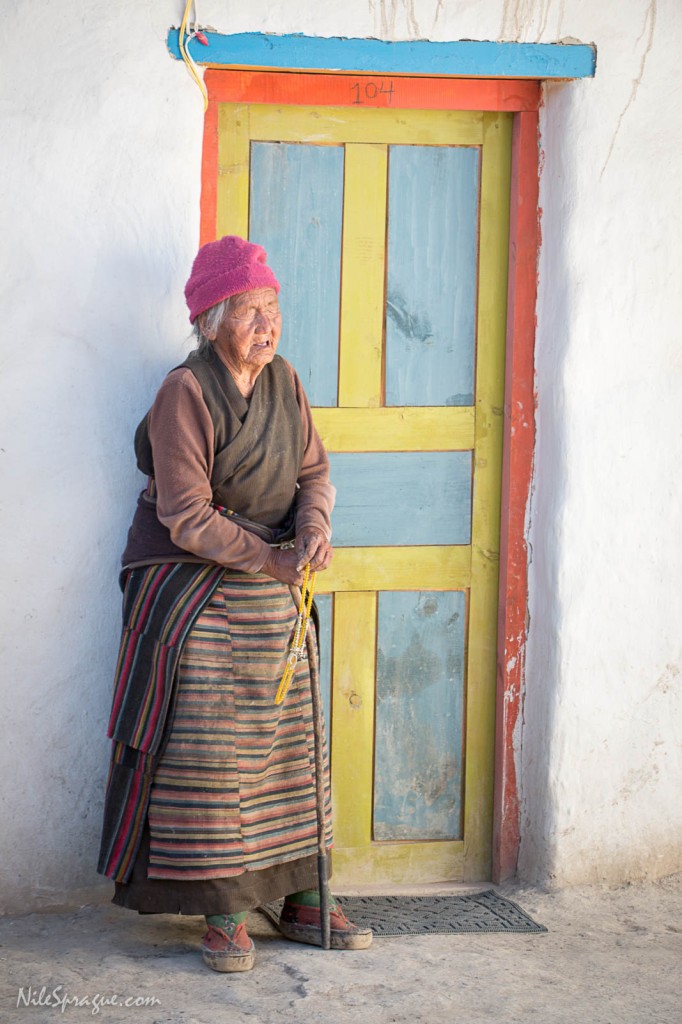 Ninety-two year old blind great-grandmother standing in the courtyard of her grandson’s hotel, Mona Lisa Smile, Lo Manthang, Upper Mustang, Nepal. She has been blind for twenty years, and lives with her daughter, grandson, granddaughter-in-law, and great-grandson. She navigates the area with one hand against a wall so she can safely find her way. 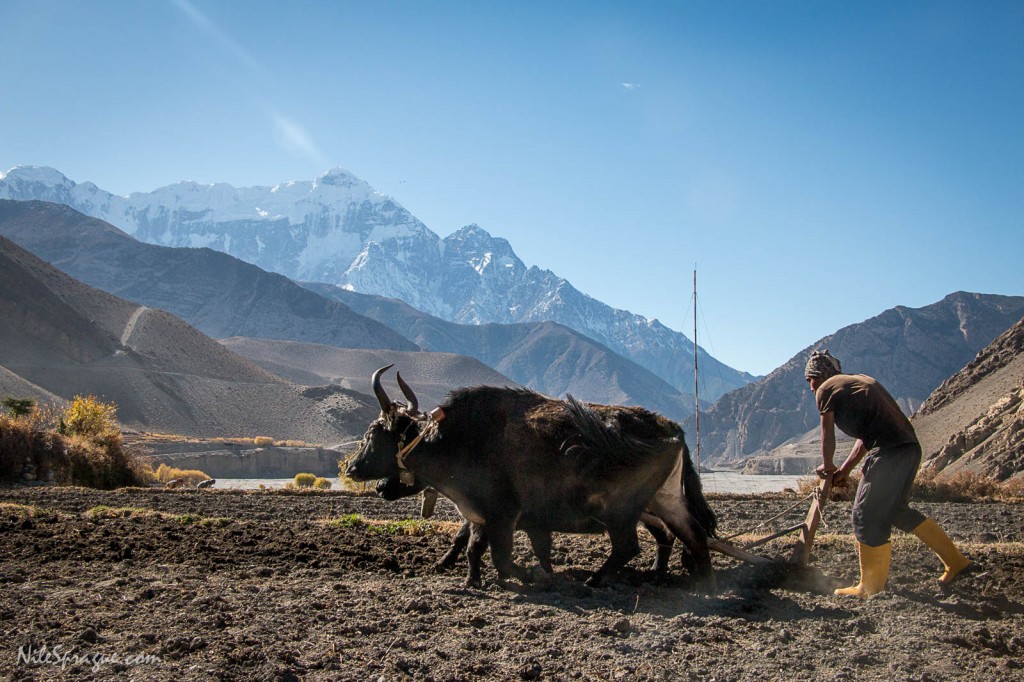 Man plowing field with dzomos, a cross between a yak and domestic cattle, with Nilgiri South (22,568 feet) in the background, Kagbeni, Lower Mustang. Cell tower in background. Despite the remote, mountainous location of the village, cell coverage is abundant, bringing connection with the broader world.